Self-esteem refers to one’s general sense of worthiness as a person (Rosenberg, 1979). Global self-esteem – the evaluative component of self-knowledge, heavily in-vested with feelings about the self – “is literally defined by how much value people place on themselves… High self-esteem refers to a highly favorable global evaluation of the self. Low self-esteem, by definition, refers to an unfavorable definition of the self” (Baumeister et al., 2003, p. 1). Low self-esteem in adolescence is a risk factor for negative outcomes in important life domains. For example, Trzesniewski et al. (2006) found that low self-esteem during adolescence predicts poor mental and physical health, worse economic well-being, and higher levels of criminal activity in young adulthood. Similarly, other studies found that low self-esteem prospectively predicts antisocial behavior, eating disturbances, depression, and suicidal ideation (McGee, Williams, 2000; Donnellan et al., 2005; Orth, Robins, Roberts, 2008). Notwithstanding, research findings have supported that people in different cultures (e.g., collectivism vs. individualism) may have various perceptions and evaluations about themselves due to distinct self-construals (Markus, Kitayama, 1991). For these reasons self-esteem is extensively studied in a cross-cultural perspective, but there are still several debates concerning cultural differences. Specifically, although it is widely believed that people in individualistic cultures have higher self-esteem than in collectivistic cultures (e.g., Heine et al., 1999; Chan, 2000), some studies demonstrated that collectivist people do not differ from individualistic people in their level of self-esteem (e.g., Schmitt, Allik, 2005; Li et al., 2015). More recently Cai et al. (2007) suggested that Chinese (collectivistic) feel as positively toward themselves as Americans (individualistic) do, but are less inclined to evaluate themselves in an excessively pos-itive manner (see: Cai, Wu, Brown, 2009).

Although many scales are available for measuring self-esteem, the Rosenberg Self-Esteem Scale (RSES; Rosenberg, 1965), which is by far the most popular among researchers, has been shown as one of the few tools with good psychometric qualities to assess global self-esteem (Blascovich, Tomaka, 1991; Baumeister et al., 2003) and was extendedly used in cross-cultural studies. The scale is highly reliable. Indeed, its reliability is so high that a single item (“I have high self-esteem”) may be sufficient (Robins, Hendin, Trzesniewski, 2001; Baumeister et al., 2003). Initially, self-esteem was conceived as an indivisible concept and within that framework the RSES was developed as a unidimensional construct (e.g., Schmitt, Allik, 2005). However, self--esteem’s unidimensionality has been very much debated, and evidence for a dual-istic approach of self-esteem was proposed by Tafarodi and his colleagues (Tafarodi, Swann, 1995; 2001; Tafarodi, Milne, 2002), who identified two correlated but distinct factor of global self-esteem (Tafarodi, Swann, 2001) that provided a superior fit compared to a one-factor global self-esteem model. According to this factor model, self-esteem is comprised of the dimensions self-competence and self -liking. Self--competence, defined as the evaluative derivative of personal agency, refers to the generalized sense of one’s own efficacy or power; it reflects the degree to which people see themselves as competent, capable and efficacious (efficacy-based self-esteem). Self-liking, on the other hand, is defined as the evaluative experience of oneself as a social object, a good person, socially relevant, and maintains group harmony ac-cording to internalized criteria for worth. Self-liking refers to the generalized sense of one’s own worth as a social object; it reflects the degree to which individuals feel they are persons of value (worth-based self-esteem) and it is considered to depend more on internalized positive regards from others. Several studies demonstrated that discerning self-liking from self-competence can be valuable (e.g., Bardone et al., 2003; Sassaroli, Ruggiero, 2005). Although based on their findings, Tafarodi and Swann (1995) developed a questionnaire specifically designed to measure both dimensions of self-esteem, the RSES self- liking (SL_RSES) and self -competence (SC_RSES) dimensions can be derived from the RSES based on the two factor model identified by Tafarodi (Tafarodi, Milne, 2002).

Why Polish adolescents versus Italy and China

As already quoted, self-esteem and its dimensions (i.e., self-liking and self-competence) were extensively studied and debated in a cross-cultural perspective with inconsistent results. The most recent studies stressed the importance of cultural power disparities closed associated with national variation in self-esteem and its two dimensions (e.g., Schmitt, Allik, 2005; Li et al., 2015).

Poland, Italy and China are three nations with different cultural values. According to Hofstede’s individualism-collectivism model (http://geert-hofstede.com), China is a typical collectivistic country, whereas Italy is representative of individualistic countries. Chinese culture requires people to be modest and not to show their personal strength (e.g., Cai et al., 2007). In Poland several ethical, religious and social differences are present in one culture, due to its historical heritage (Stefaniak, Bilewicz, 2016). Specifically, with the collapse of communism and its collectivistic culture in 1989, many fast changes occurred at the economic, social and individual level, making a country, which used to be collectivist, to undergoing the process of social and economic system transformation closer to individualistic countries (Liberska, 2002; Różycka, Żemojtel-Piotrowska, Khanh Ha, 2013; Brycz, Różycka-Tran, Szczepanik, 2015) and this is confirmed by Hofstede’s individualism-collectivism model (http://geert-hofstede.com), which categorized Poland as an individualistic country (the Individualism score is 60). The sudden change from a collectivistic/ communism structure, to a individualistic/capitalism society may have threaten the sense of security and belongings perceived under the communism (Wejnert, Djum-abaeva, 2004; Siemieńska, 2014) and must have had an impact on self-esteem above all in youngest generation.

Mean level of self-esteem, self-competence and self-liking in a cross-cultural perspective in adolescence

During the past 2 decades, the large number of studies which have examined gender differences in self-esteem (Kling et al., 1999; Twenge, Campbell, 2001; Robins et al., 2002; Trzesniewski, Donnellan, Robins, 2003; Orth, Trzesniewski, Robins, 2010; Shaw, Liang, Krause, 2010; Orth, Robins, Widaman, 2012; Zeigler-Hill, Myers, 2012) found that, starting from adolescence, a significant gender gap such that males tend to report higher levels of self-esteem than females do. About gender differences in Polish, data were published only for the whole sample including subjects aged 15-55 (females N = 669, M = 29.19, SD = 4.28, males N = 451, M = 29.94, SD = 4.26) (Łaguna, Lachowicz-Tabaczek, Dzwonkowska, 2007), suggesting significant gender differences, even if no statistical analyses were run by the authors. In Italy, significant higher level of self-esteem were found in boys as compared with girls in the Italian validation study carried out by Prezza, Trombaccia and Armento (1997) and in University students (Mannarini, 2010). Higher level of self-esteem in males were also found in 348 students (214 males and 134 females) from a large university in Main-land China (Ye, Yu, Li, 2012).

Considering that the aforesaid debates have not been completely solved and that there are some limitations in previous studies and that further investigation is warranted above all in adolescents’ sample, the present study compared the level of self-esteem, self-liking and self-competence in Polish adolescents with Chinese (collectivistic) and Italian (individualistic), which may contribute to some extent to the existing literatures.

The Rosenberg Self-Esteem Scale (RSES; Rosenberg, 1965) was used to assess respondents’ level of self-esteem. This scale consists of ten items rated on a 4-point scale (from “1 = strongly disagree” to “4 = strongly agree”), five of which are negatively worded and the other five items are positively worded. Higher scores indicate better self-esteem. Following Tafarodi and Milne (2002), the RSRS was split into two dimension self-liking (5 items) and self-competence (5 items).

This study is part of a large collaboration between the University of Padua (Italy), Guangzhou University (China), and Catholic University of Bydgoszcz (Poland). The study was conducted in compliance with the ethical standards for re-search outlined in the Ethical Principles of Psychologists and Code of Conduct(American Psychological Association, 2010). Approval by the Ethical Committee for Psychological Research was obtained from universities. Consent was obtained from school masters and parents before data collection and adolescents provided their assent before participation. No incentives were awarded; voluntary participation and anonymity were emphasized. Participants completed the questionnaires during regularly scheduled classes and were instructed to be open and honest in their responses and to refrain from sharing answers with each other. Administration was conducted in compliance with the standard procedures. Participants’ personal information was kept highly confidential.

Data were processed in SPSS 18.0. First, the internal consistency reliability of RSES (total score and dimensions) were calculated. Second, Univariate (ANOVAs) analyses of variance were conducted to determine if country and gender and their interaction as between-subject variables had a significant effect on total self-esteem score and self-liking and self-competence scores. Differences were interpreted when (1) F was significant (p < .05), and (2) partial eta square (η²p) were substantially significant (1-5%; Cohen, 1988; 1992). 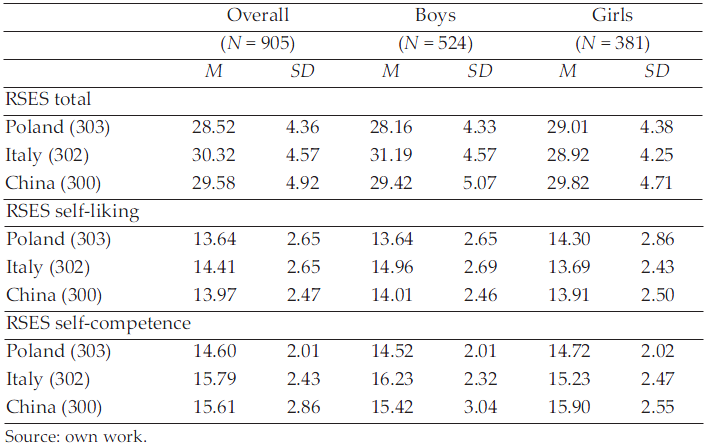 ANOVAs were performed with self-esteem total score, self-liking and self-competence scores respectively as dependent variables and with country and gender as independent variable (table 2). 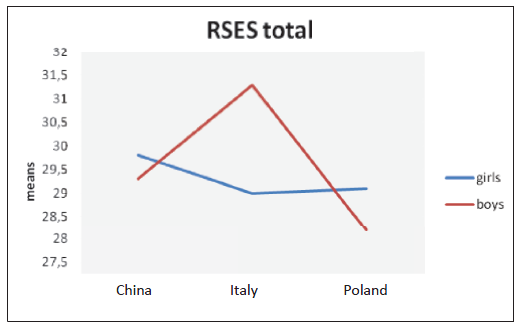 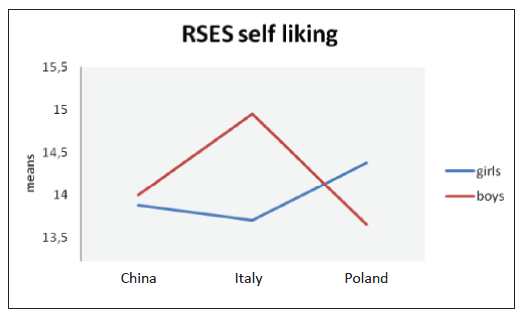 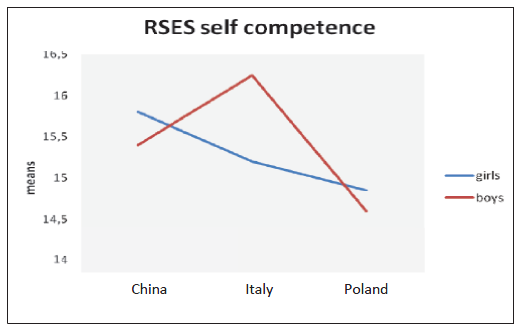 Student’s t-test for independent samples was used to analyze significant differences in these interactions. Summary of these t-tests are shown in table 3.

Table 3. Summary of the Student’s t-tests 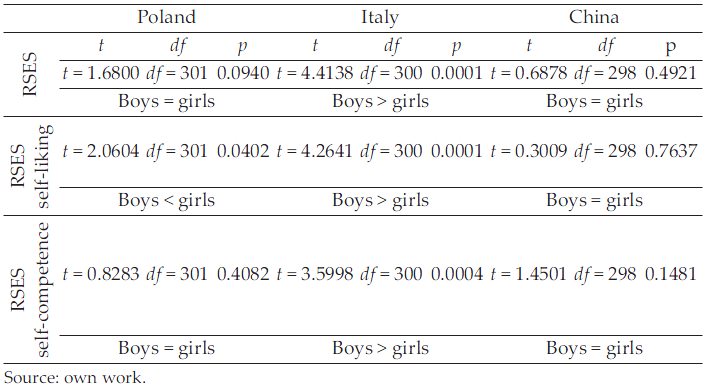 However, significant cultural differences in self-esteem levels were found, with Polish adolescents scoring lower than the other two samples. Findings about Italy and China confirm previous results in adolescents samples that did not support that adolescents in individualistic countries (e.g., Italy) have higher self-esteem than in collectivistic countries (e.g., China; Heine et al., 1999). The trend of self-competence goes in the same direction. Polish adolescents feel less competent, capable and efficacious than their Italian and Chinese counterpart. Adolescents of the three countries feel they are persons of values at the same level (self-liking). Within the massive cultural changes, Polish adolescents are asked to increase their goals in autonomy, self--development, economic welfare and all this looks like to make them more insecure about their self-esteem and self-competence in reaching these goals. This insecurity looks like to be the same for boys and girls, as underscored by the fact that no significant difference was found about gender in Poland for global self-esteem or self--competence. The trend for gender difference among Chinese adolescents showed that both girls and boys reached the same level of global self-esteem and self-competence. Italian adolescents were the only ones in which the literature trend that boys have a higher level of self-esteem than girls was confirmed. Anyway, only Polish girls’ self-liking is higher than boys. These findings supported the view that cultural power disparities were most closely associated with national variations in self-esteem, self-competence, and self-liking (Schmitt, Allik, 2005).

This study has some limitations. Data were collected in only one city within each country, and consisted largely of urban youth in one town in the three countries. This means that youth not attending school or living in other social context were excluded, thus the generalizability of result to the overall population is limited. The study was only devoted to means level of global self-esteem, self-competence and self-liking excluding any relation with other developmental outcomes such as depression and other psychological problems.

Despite these limitations, this paper highlights how deep changes in political culture can influence global self-esteem and self-competence. Findings of the current study also inform the development of school-based intervention programs for parents and adolescents aimed at increase self-worth, within a cultural shifting from a communism to a liberal culture mainframe.

Sassaroli, S., Ruggiero, G.M. (2005). The role of stress in the association between low self-esteem, perfectionism, and worry, and eating disorders. International Journal of Eating Disorders, 37, 135-141.

Stefaniak, A., Bilewicz, M. (2016). Contact with a multicultural past: A prejudice-reducing intervention. International. Journal of Intercultural Relations, 50, 60-65.

Tytuł: The level of self-esteem among Polish adolescents in a cross-cultural context